It’s Teachers’ Day, and this seems as good a day as any to post something in my long-neglected blog.

I had a lot of teachers.  Some were pretty good.  Some weren’t.  But a few deserve special praise, which coming from me doesn’t necessarily mean a lot (I was a TERRIBLE student), but I’m going to heap it on them anyway.

Let’s start with my second grade teacher, Mrs. Barron  (St. Paul’s School, Hingham).  Mrs. Barron had the task of ushering us 7-year-olds through our First Communion.  Seven is the “age of reason” in Catholicism.  7-year-olds are also crazier than rats in coffee cans.  Poor Mrs. Barron; she was actually my teacher TWICE, because in first grade I spent half the day in second grade, and in second grade I spent half the day in third grade, and so on, because apparently I was very smart, but not quite smart enough to skip a WHOLE grade.  I don’t know.  It was very confusing.

I remember her trying to soften the blow about the whole Santa Claus thing by telling us that Santa would never die as long as we kept him in our hearts.

I adored her for reasons I couldn’t quite put my reasonable 7-year-old finger on.  Maybe because she was so patient with me.  I was a screeching, spinning top of a child, always hovering somewhere between hysterically giggling and inconsolable sobbing, and anything could push me one way or the other.  Mrs. Barron protected me from a lot of things.  She was one of the few teachers in that school to do so.

Mr. Green (Central Jr High School, Hingham).  He was my 8th grade history teacher.  Now, a lot of my readers know what he was dealing with back then: 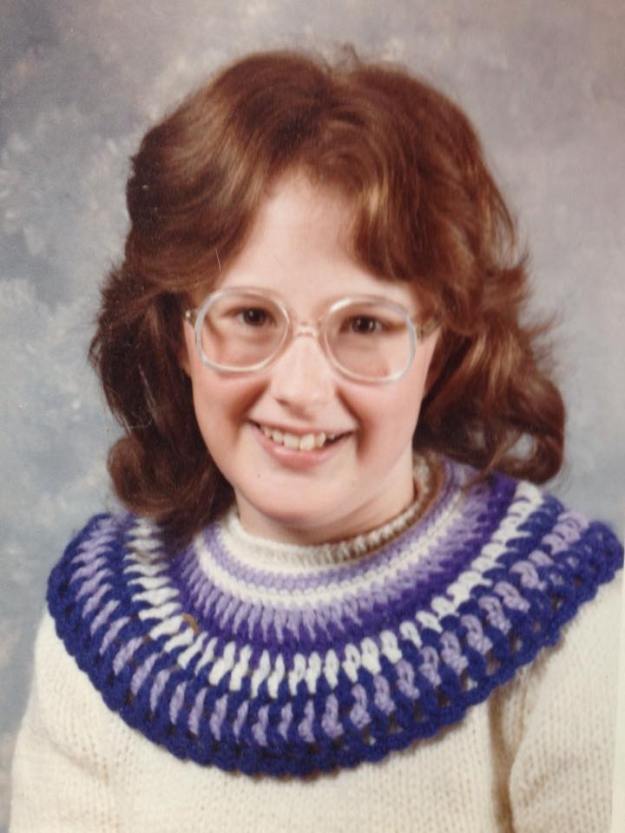 Somehow he managed to not be – you know – BLINDED by my sartorial splendor, and taught me the one line that is forever burned into my brain, and that I can spit right back out some 34 years later:  “The spark that ignited the powder keg that was WWI was the assassination of Archduke Franz Ferdinand and his ugly wife, Sophie.”  Verbatim.  Goddamn, man.  He knew how to teach.

Richard Jensen (Hingham High School).  Sometimes there are those teachers who get you at an almost cellular level.  Such was the case with Mr. Jensen.  He was my 10th grade history teacher.  I remember returning a ruler to him the first week or so that I was in his class, and offhandedly saying, “Here ya go, Mr. Jensen – RULER LENSKA.”  Now, I said a lot of weird shit as a kid.  A lot of shit that ultimately alienated me from my peers AND my teachers.  But I remember Mr. Jensen’s eyes BUGGED OUT when I said that.

“How in the HELL do you know who Rula Lenska is?”

“I have a shirt for you.  I’m bringing it in tomorrow.”

It was an old tshirt with iron-on letters which read “WHO IS RULA LENSKA?”  I was utterly thrilled.  So….nowadays I think teachers gifting students articles of used clothing is probably frowned upon, yeah?  Like it’s inappropriate or something.  Listen – this was a gift from the HEART.  I still have it.  In fact, when I get home I’m gonna dig it out of storage and wear the shit out of it.

Doug Ryan (Hingham High School).  In the world of recovery, one of things that’s suggested that we do in order to remain sober is make amends whenever possible to those we have wronged.  I owe an amends to Mr. Ryan.  Mr. Ryan was my Latin teacher for THREE YEARS, and I am quite sure that I was a source of eternal frustration for him, because – as I’ve said – I was a terrible student.  Just awful.  Clearly could do the work, but didn’t.  But I loved Latin.  I loved Mr. Ryan.  After we finished translating Iason et Argonautae from Latin to English, our reward was a viewing of this:

Holy Sweet Infant Of Prague On A Harley.  Imagine being 15 years old and watching that.  Mind – BLOWN.  Is it any wonder why I kept on with Latin, and this guy?  The best teachers are those who don’t look down on their students, who believe that they are capable of grappling the heavy stuff.  And it doesn’t get much heavier than Zoe Caldwell as Medea.

I do remember that I popped in to his classroom while I was still in college, to tell him that I was studying German.  He seemed impressed.

Chuck Ozug (Hingham High School).  Another one who saw something besides a lazy kid.  12th grade English.  Saw my love for language, and saw that I was – well – rather creepy, and made me read Greenleaf.  Who DOES that?  Someone who thinks the student is ready for the work, even if she turned in a grocery list in response to the last pop quiz.

The last one I’ll mention is John Higgins (Central Jr. High School AND Hingham High School).  My Drama teacher.  I could write reams about Hig, and I have, but here’s the tl;dr version:  He created the safest space I’d ever known, where I was free to express myself and indulge my whims without judgment.  He cast me in the role I absolutely should have been cast in.  He didn’t cast me in the role I thought I “deserved.”  My two oldest and most treasured friends came into my orbit because of Drama Club. I owe him much for these things.  More than I could possibly repay.

So, thank you all.  You made me into the woman I am.  Take that as you will.