I doubt you’ll ever see this.  Mine is just one more angry, bewildered voice in the internet wilderness.  Angry and bewildered because of the “punishment” meted out to your son, Brock Turner, who assaulted and violated an unconscious young woman.

But I saw your letter to Judge Aaron Persky, just like nearly everyone else with access to the internet.  And as I read it, my jaw dropped further and further until it was fairly well positioned solidly in my lap.

I don’t even know where to start.  “Tone deaf” doesn’t even begin to describe it.

“Brock has an easygoing personality that endears him to almost everyone he meets.”

I’m sure.  His victim probably would have found his frantic, violent endeavoring to penetrate her quite endearing indeed, had she not been – you know – unconscious.  I wonder how “easygoing” he was as he ripped her bra from out of her dress to get at her.  Tender.  Gentle.  Endearing.  Yes, your son sounds goddamn delightful, sir.

“As he got older and progressed in school, he needed my intervention less and less as he is gifted in his ability to understand very complicated subject matter.”

Yet he obviously couldn’t grasp the relatively simple concept of NOT RAPING SOMEONE.

And why is that, Mr. Turner?  For all your drilling Brock on his spelling and coaching him in the sports in which he excelled, you seemed to have failed to impart some crucial lessons in respecting women, respecting boundaries.  And we need look no further than this sentence to realize this:

“That is a steep price to pay for 20 minutes of action out of his 20 plus years of life.”

20 minutes of action.  This is so repulsive and evil that I gasped when I read it.  It says everything we need to know about you and your son.  Reducing this heinous, reprehensible CRIME to snarky innuendo.  Your boy got his 20 minutes of “action,” ho ho ho.  Back slapping all around.

How does that happen?  How does someone manage to completely FAIL to see rape for what it is?  She was on the ground, passed out.  Your son yanked up her dress and drove her unconscious body into the dirt as he attempted to get what he felt he deserved.

What’s the price his victim has to pay for that same 20 minutes?  You don’t seem to want to even consider that.  Because poor Brock is so “devastated” at being a convicted rapist that he can’t even enjoy a steak anymore.  Brock doesn’t enjoy his steak, while his victim has to spend the rest of her life battling fear.  Fear of intimacy.  Fear of other men.  Fear of what others think of her, now that she’s been picked apart like carrion by your son’s defense team.

“Brock can do so many positive things as a contributor to society and is totally committed to educating other college age students about the dangers of alcohol consumption and sexual promiscuity.”

Let me spell this out for you in the way you helped Brock spell out his vocabulary words every week:  THIS IS NOT ABOUT ALCOHOL CONSUMPTION.  THIS IS NOT ABOUT SEXUAL PROMISCUITY.  This is about your son’s forcing himself on someone who was INCAPABLE OF CONSENT.  Rape is not about sex.  Rape is about power.  Rape is the need to degrade and dominate someone.  It has nothing to do with how much either of them drank.  It has nothing to do with how she was dressed.  This was not some tipsy tryst at a party.  This was your son raping a woman behind a dumpster.  Process that.  Comprehend that.

You paint a nice picture of Brock.  A chipper, aw-shucks kind of kid from the Midwest who worked hard and got into Stanford, only to find that Stanford was a hotbed of temptation that turned him to dark practices like binge drinking and “promiscuity.”  The media certainly helped with that, talking about Brock’s swimming stats and running the same beatific image of him, which I won’t post here, because it’s more important to see this picture, that’s only been seen in the past few days. 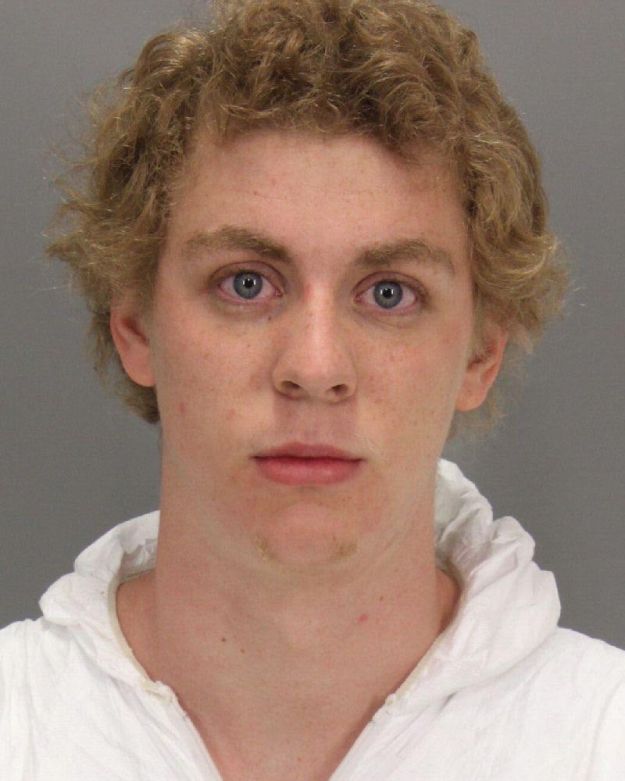 The fact that you call this “20 minutes of action” says it all.  Grab a woman, get what you want from her.  Action.  No regard for her whatsoever.  He learned that attitude, just as you most certainly learned it.  That’s cultural.  This is what is meant when we talk about “rape culture.”  This is not some hysterical posturing geared towards demonizing all men.  This is addressing the very real problem of continued, systemic disregard for women.  Attitudes like yours are not isolated.  The question is can they be unlearned?  I hope so, for your sake, and for that of your son’s, and for women everywhere.