What’s happening This Week On Facebook? Or, rather, what are MY friends posting about? Let’s take a look:

Lots of people on a Fred Phelps Deathwatch. I’m not one of them. I have semi-personal reasons for not joyfully waiting for this man to die. In the last year-and-a-half, I’ve been getting to know a couple of ex-members. I have been surprised, and humbled, by their intelligence, humility, and wit. Say what you want about Westboro Baptist Church, the members that leave are invariably some of the most interesting people you’ll ever meet. And understand this – they leave knowing full well that they will probably never see, nor speak to, most of their family ever again. Fred Phelps may be a monster to most of us, but to these young people, he’s “Gramps,” and they are being prevented from going to see him, even though he himself has allegedly been excommunicated from his own church. I don’t know if a lot of us can comprehend this level of dysfunction, but it has to be incredibly confusing, and painful, for those who’ve left. What pleasure is there in rubbing it in?

I don’t cotton to fighting ugly with ugly. I have never encouraged anyone to go where WBC is picketing, to pick fights or threaten them, simply because in doing so, you are giving them exactly what they want. And given the WBC’s stance on funerals (they don’t hold them, believing as they do that it is “worshiping the dead,” rather than worshiping God), the fact is that if/when Fred passes, there will not be a funeral for anyone to protest. So those signs you want to make? Invest your time and energy into donating to LGBT, veterans, or Jewish causes.

I understand the anger that they inspire. I too believe that what they do is reprehensible, and I continue to be fascinated-yet-horrified at the sophomoric, scatological glee with which they go about their business. But I’m not going to “celebrate,” or take any pleasure in, what is happening to the Phelps family right now. The center cannot hold, and the WBC will disintegrate, sooner than anyone probably realizes. Let it do so, quietly.

EVERYBODY STOP POSTING YOUR INANE THEORIES ON THE MALAYSIAN AIRLINES CRASH RIGHT NOW. Courtney Love has this all figured out, okay?

I….yeah. Look, I suppose if you live in Manhattan and need a little extra scratch, renting your apartment to TOTAL STRANGERS is a totally great idea, because – after all – they’re “verified users” of an internet site, and everybody knows that the internet is completely secure and shit.

I saw an honest-to-god Juggalo once. Outside of the Walgreens on Centre Street in Malden. I wondered how he was able to survive so far away from any retail establishment that sold Faygo. Curiosity piqued, I went to Faygo’s website, only to learn that they require a great deal more personal information than I was willing to provide, simply to learn how Juggalos in the New England area get their Faygo fix, so to speak.**

I digress. I can’t hate on this. It’s love. Love, with extra helpings of face paint and (presumably) a Faygo Fountain. Bless their hearts.

* – In fairness, I haven’t located a single article on this in which Purple Drank is mentioned. I’m just, you know, assuming.

I’m toying with making this a regular feature, if only to get me posting here more. Basically, I want to observe some of the things that my friends are talking about on Facebook, and go into a little more depth here. It’s a prompt of sorts. We’ll see.

At any rate, this week I’m seeing a lot of this:

If you’re not familiar with Terry Richardson, here’s the deal: he’s an “American fashion and portrait photographer.” His “snapshot aesthetic” utilizes a white backdrop, and lighting which gives his subjects a very blanched, beat look. He’s very trendy.

It doesn’t take a lot of Google sleuthing to yield some very unsavory information about Terry Richardson. And yet celebrities flock to him, because – simply put – having Terry Richardson shoot you means that you’ve “arrived.” A Richardson portrait is the 21st Century equivalent of a Warhol silkscreen. And because of this, famous people are completely willing to overlook the nastiness, the abuse, and the degradation of NON-famous people in order to have those bleached-out, totally gross portraits of themselves. Status will always trump decency. So, you know, well played, famous people. If you stay good and drunk, you can continue to not think about how many women have been exploited and abused by this fucking creep, and that you’re basically enabling him to do it. May you treasure those pictures always.

On a more bittersweet note, loads of my music scene pals posted the link to this bit of news, about the impending demise of Central Square’s, um, “finest” pizza establishment: Hi-Fi:

What can I say about Hi-Fi? From around 1988 to 2002, it was the place I went to because I was too scuddered to walk down Massachusetts Avenue to Wendy’s. Unceremoniously jettisoned from TT’s or The Mid East for being a drunk ho? Get your shit together at Hi-Fi.

Once I got sober? Never set foot in the place again, even as I continued to see and play shows in the immediate vicinity. One – because I no longer needed that refuge in which to weep while attempting to “soak up” the alcohol braying through my bloodstream. Two – because sobriety afforded me the chance to get reacquainted with my taste buds.

Horrible pizza. Just terrible. A friend of mine has argued that it was at least “good enough” to keep them in business for 40 years, but I don’t buy that. The reason they stayed in business for 40 years? LOCATION. Within stumbling distance of two major clubs. I ask you, fellow denizens of The Scene: did you ever actually, specifically, go to Hi-Fi for pizza when NOT either at a show or playing a show? Like, did you go there to have dinner/lunch independent of a show? If this was a place you willingly went to because you loved that pizza SO MUCH, I would love to hear from you. Because you puzzle me.

And yet, I lament its closing. I truly do. It’ll be said over and over for the next few days, and I’ll say it, too, because it’s true: END OF AN ERA. My 23-year-old self would not recognize Central Square these days, and this is one more landmark that will be replaced by a Domino’s, or a bank, or some terrible place that sells those Vera Bradley quilted bags. Sadness.

What Animated Dog Am I? Mr. Peabody. DUH. 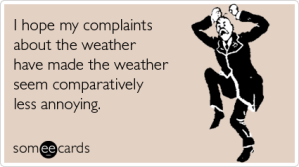 Finally, it’s March in New England, which means volatile weather to the max. Yesterday it was sunny and in the upper fifties. On Monday we woke up to snow. It’s going to snow tomorrow, too, probably. It will go back and forth like this until at least mid-April. We know this, and still we complain. And if we’re not complaining about the snow, we’re complaining about people who are complaining about snow. Because Facebook.