I have been entirely too much in my feelings since October. I’m still putting on a good show on Facebook, where it’s fairly easy to compartmentalize and show only what you want people to see. The fact is that I have been battling a pretty ugly bout of depression for the last 3+ months.

Depression lives deep inside me at all times, kind of the way the chicken pox virus camps out near your spinal column. It never totally goes away. Like Churchill’s “black dog,” it slumbers until something rousts it, and it lurches out, yowling and slobbering, and right now it’s taking massive amounts of my energy to take it for a walk and put it back in its crate.

It’s situational, for the most part, and while the circumstances that brought it on are largely resolving themselves, I still have days where I feel like a discarded Dunkin’ Donuts cup in a dirty snowbank.

That’s about as much analogy as I can muster right now. But that was pretty good, right?

So, since the developments last fall which left me emotionally upended, I’m slowly but surely doing everything I’m supposed to. Reaching out, cultivating some really solid friendships with amazing women, staying sober, checking in with the therapist and the psych nurse…and mmmaybe buying crap I don’t need here and there. Fuck it – I spent my bonus this year on totally responsible, adult purchases (a winter coat that practically doubles as a sleeping bag, and Bean boots); I can buy this utterly ridiculous dress that I fully intend to wear at my band’s next gig: 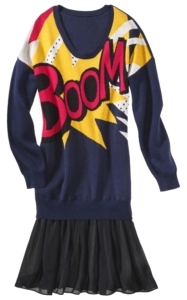 Even though it’s a sweater dress, and sweater dresses look good on NO ONE, I am going to wear the shit out of this. I DON’T CARE.

And I suppose I need to start writing again.