I’m losing my edge to the art-school Brooklynites in little jackets and borrowed nostalgia for the unremembered eighties.

I always chuckle a little at that particular line in this LCD Soundsystem song.  “Borrowed nostalgia” is something I simultaneously embrace and abhor.

I was a little kid in the Seventies, which – as anyone who lived in the Seventies knows – was a decade in which everyone was nostalgic for the Fifties.  Happy Days.  Laverne & Shirley.  Sha Na Na.  Grease.  I had done some mental calculating and came to the realization that my parents had been teenagers in the Fifties, and thus grilled them relentlessly on the veracity of the onslaught of wholesome, peppy imagery I was being fed throughout the mid-to-late-Seventies.  Did my mom own a poodle skirt?  Was my dad a greaser?  Did everyone sip milkshakes and listen to Elvis and sing “shoo-bop sha wadda wadda yippity boom de boom” every time it was clear that some nice girl was about to lose her virginity to John Travolta?  I HAD QUESTIONS.

I had also developed a serious obsession with my parents’ record collection, and became a tiny Borscht Belt comic, rattling off Rusty Warren and Allen Sherman routines to the great amusement of, well, anyone over the age of 40.  My peers, on the other hand, viewed me with bewildered disdain.  I became convinced that I was “born at the wrong time,” and holed up in my bedroom, furiously studying up on old MGM movies and silent film star scandals.  Even now, I will SCHOOL y’all on any of this.

So I grew up with borrowed nostalgia.  I absolutely was nostalgic for a time in which I wasn’t even alive.  And this, of course, led me to wonder what people would be nostalgic for in the future.  I distinctly remember sitting on our front steps waiting for my mother to give me a ride to the Central Junior High School auditorium, dressed in what I believed to be the only “historically accurate” costume for our production of Bye Bye Birdie (a simple red sweater over a blouse with a Peter Pan collar, and a Pendleton plaid skirt that my mother actually wore in high school, as opposed to the garish poodle skirts of my castmates, which I considered clownish).  I smoothed the green plaid skirt over my knees, and started to wonder what people would be nostalgic over in twenty years.  “Pinstripe jeans, probably,” I thought.

In my twenties, I was witness to a perverse collective need to throw “Seventies Parties,” where everyone decked themselves out in chest medallions, Danskin leotards, and stained polyester leisure suits picked up at Goodwill.  By the end of the night, everyone would be rank with sweat and sticky with spilled TAB.  And I thought, “Why does anyone want to remember this shit?”

Now, Mad Men is all the rage, with everyone throwing classy cocktail parties and sporting slick, retro duds.  Yet I’m not as bothered by that, simply because those are the kinds of clothes that actually look good on me, although I do regard these get-togethers with a little side-eye, because if you’re really, truly paying attention to this show, all those cocktails are leading to nowhere good.  (Fuck’s sake, people – Don Draper is at the point now in the series where he HAS to have a drink in the morning, because if he doesn’t, he’ll have a seizure.  I digress.)

But when it comes to the decade in which I spent my formative years, I am ridiculously territorial.  A couple of years ago, my niece Caroline was going to an “Eighties Party” at a friend’s house, and was happily telling me about her outfit, which of course was a combination of all the WORST sartorial statements of that decade:  big hair, leg warmers, shoulder pads.  I wanted to tell her that not everyone dressed like that.  I myself favored giant plaid old guy shorts worn over long johns, paired with floral vests bedecked in vintage brooches.  Let me tell you – I was HOT.

I find myself putting a far more positive spin on that decade than I should.  I was, in the main, pretty miserable in the years between 1981 and 1988, for all kinds of reasons that I won’t get into right now.  But the music that acts as aural Prozac for me has always been music that came out during that time.  I have every damn 45 single I bought from ’81 on, and you’d best believe I still play them, ON A RECORD PLAYER, whenever I am in need of a psychic boost.

Kevin and I went to see Big Country a few weeks ago.

The current incarnation of this band includes members of Simple Minds and The Alarm.  As such, there was no goddamn way I was going to miss this show.

There are those that say that the bands we listened to in our youth have no business going out there and playing those songs for us.  They’re old, we’re old, it’s silly, it’s somehow…sad.  I disagree.  I’ve been to a lot of shows in the last 28 or so years.  The ones that rank the highest?  Bands on so-called “nostalgia/reunion” tours.  Bauhaus.  Gang of Four.  Adam Ant.  Big Country.

I was completely swept up in that show.  I cried, I hollered, and I bounced around in front like a happy puppy.  AND I GOT MY PICTURE TAKEN WITH DEREK FORBES.  DEREK FORBES. 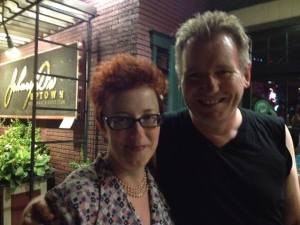 It was everything that my 15-year-old self could have wanted:  I was wearing a dress from the Fifties, standing next to the former bass player from Simple Minds (who smelled really, really good, despite the fact that he was also really, really sweaty).  God.  DYING.

It’s nice to have nostalgia that’s purely mine.