Haven’t updated in a while.

The home situation continues to simultaneously fascinate me and break my heart. As my mother-in-law loses more and more bits of the things that made her who she was, we find ourselves in a maelstrom of appointments. Medical appointments. Legal appointments. Meetings with lawyers and elder care providers. Meetings about Medicaid and PACE. Meetings about how we’re going to have to “spend down” the money she worked so hard to save, because she’s not eligible for certain services unless she’s, on paper, dirt poor.

And in the midst of it all is my mother-in-law, who some days will surprise us with her old sharpness and sense of humor. She’ll tell a story about a crazy ex-boyfriend who took her on a trip to Texas. But then she can’t remember how to work her shower. She knows that she doesn’t know how to use her DVD player and VCR anymore, so she disconnected these things from the television, and set everything up so she can still watch “Jeopardy.” The VCR and DVD player are back in their original boxes, stacked neatly by the door so we can take them to Goodwill. But she doesn’t remember my name. Some days she’s cheerful and docile. Other days she’s angry. She accuses Coombsie of not giving her enough money. She’ll claim she hasn’t been shopping for clothes in years, even though the jeans she’s wearing are brand-new.

So much of what she needs is wrapped up in so much red tape. So much of what “needs to happen” is held up by paperwork. We know there is more we could be doing, but we simply CAN’T.  She also has the presence of mind to know what she doesn’t want. She doesn’t want to be taken to a senior center every day until 3. It depresses her. She’s the only one there who can still manage to have a conversation, and so she talks to the staff, when they’re not helping all the people who can’t have a conversation. She expresses this with astonishing clarity. We are respecting her wishes in this situation, because we need to treat her like the adult that she is, and it is important to her, right now, that she feels that she is being heard. You do not infantilize someone with Alzheimer’s, no matter how childlike they become.

It’s exhausting. I try to remember to be grateful. I’m sober, and can be present for Coombsie as he goes from meeting to appointment to phone call. There’s that, anyway. But mostly I feel tired and sad and guilty and judged.  And alone, sometimes, even when I know that’s not the case.

We move forward, even if we don’t see any progress. A couple of weeks ago I sort of lost it, sat at the kitchen table, and cried and cried. I told Coombsie that there hasn’t been one extended period of time, over the last 6 years, where we haven’t been in the throes of some deeply personal crisis. And he looked at me and said, “That’s being an adult.” Nobody is exactly cruising through their lives with no obstacles, no setbacks, no disappointment. I know this. I say this all the time: when I got sober, I signed on to get my life back. And I got it, warts and all.  And, you know, there’s that “for better or for worse” thing, too.

And, really, it’s not as if our lives are dire and bleak. It’s true that this journey we’re on, where we’re just trying to let my mother-in-law live with dignity in her house for as long as she can, tends to color everything in our path. But we’re okay. Many good things are happening. That B-52’s tribute band? Still in it to win it. We’re playing a drag bar next month and I couldn’t be more excited.

And last weekend we saw a good pal of ours, Corin Ashley, open for Ken Stringfellow. You know, we have a great music scene here. We really do. But it’s not super-often that I hear a songwriter who makes me stop everything I’m doing (chatting with a friend, getting a sodie pop, scanning the room to see who I know) – I mean ABSOLUTELY EVERYTHING – because I am so entirely blown away by the craftsmanship. That’s Ken Stringfellow. Holy fucking shit.

That up there. THAT’S how it’s done, singer-songwriters. No…seriously.

Honest to God, I don’t remember the last time I was so mesmerized by a performer. I would have walked out of there giddy and elated and energized and inspired, even if I hadn’t gotten up on stage WITH HIM. Because that did happen. Ken invited Corin and his band up to play one song, and Corin – knowing my mad percussion prowess – tossed a shaker at me and said “McCOLGAN ON SHAKAAAAHHHH,” and Ken was all, “Yeah! Do it! Wait – what’s your name? Yeah!” 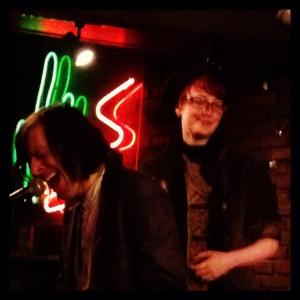 I managed to not soil myself. Trust me, it could have happened. God, I love my friends. I don’t know why they’re so nice to me.

3 thoughts on “Find Yourself Alone?”