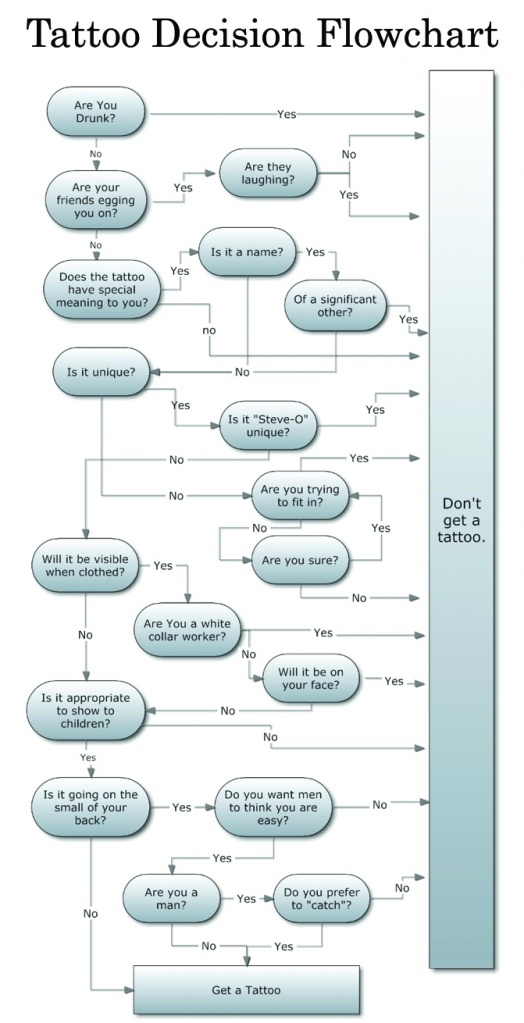 As someone who is trying not to take everything so PERSONALLY (and as a recovering addict, this is a daily challenge), I get that it’s a “funny” way to get people to think before they ink.

But as someone with a fair amount of ink, the assumptions this flowchart makes are – well – kind of insulting.

Now – I’m used to being insulted, both by total strangers and by people who know me. I remember showing up at a family reunion with half my head shaved and spending that long weekend enduring whispered reports that my hair was the topic of many discussions. I’ve had people come right up to me and tell me how much more “attractive” I’d be if I wasn’t dressed like a derelict. And I’ve gotten the stink-eye more times than I can count. This is part and parcel for anyone who’s made the decision to let his or her freak flag fly. I get that, and have tried to accept it ever since I was a teenager, when my friend Keith gave me the straight dope one afternoon in study hall: “Look, Lees – if you’re going to go around looking a certain way, you’re going to have to deal with people giving you shit for it. So either stop dressing like that, or stop whining about it.”

So I’m used to people expressing disapproval at my appearance, which isn’t even that extreme anymore. I now look like what I am: a somewhat-eccentric, “artsy” woman hurtling toward middle age. We’re a dime a dozen around here, and it’s safe to say that most of us have at least one tattoo.

I get why people don’t want a tattoo. What I don’t get is why some of these same people can’t accept that there are those of us who DO want them, and DO have them, without accusing us of possessing poor judgment, of being under the influence, or of lacking that nebulous state known as “class.”

And that’s what chafes me about this flowchart. It makes some pretty broad assumptions and/or sweeping generalizations which, I’m sorry, in 2012 are just fucking silly. Plenty of us tattooed folks hold “white collar” jobs. Plenty of women have tattoos on their lower backs and aren’t “easy,” nor do they particularly want to be thought of as such. And don’t even get me started on the homophobic undercurrent happening there.

So to the people who post this stupid flowchart on their Facebook pages, or repin it on their Pinterest boards, I ask you this: why are you wearing that dress? That hat? Those shoes? More than likely your answer will be that you wear these things because you like them, and you like the way you feel in them. Right? It’s decorating yourself, is it not? You’re making a statement about who you are and what you like. It is no different for us, only we’ve decided that we don’t want to take these decorations off.

The idea of permanence is uncomfortable for some. I understand that. Trust me when I say that I’ve weighed that particular concern very carefully, and ultimately came to the conclusion that I like the idea of my story – the people I have encountered and the things that have challenged and inspired me – right there, on my skin. And so I moved ahead with it. It is an ever-evolving installation. I have an artist I adore who understands me and – each time I come to him with another element of my story – works with me to make sure he gets it exactly right. My tattoos are about trust. They’re about enduring discomfort with the knowledge that when the discomfort has subsided, I will have something beautiful. That’s what my recovery has been about from the day I realized I had to stop drinking. And one of my tattoos reflects that concept: an cailín a bhfuil áilleacht an bhróin ina gnúis. It’s Gaelic, and translates roughly to “the girl with the beauty of sorrow in her face.”

Are there people who act hastily? Who get a little tipsy and make a rash decision that they may come to regret? Of course. In my experience, these folks are largely the exception, and not the rule. But you know what? They’re not “classless,” either. Think a minute. “Consider the source,” as my dad always says. That’s all I’m asking. I’m really trying not to whine.

Ask me about my tattoos; I’m happy to explain why I have them, provided you’re genuinely interested and not throwing shade.

7 thoughts on “In which I think about my ink.”