There are a couple of pictures making the rounds on Facebook lately. 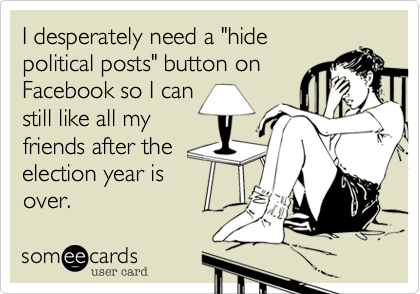 I made a decision to stay “neutral” (relatively speaking) on Facebook because I was really turned off by some of the “discussions” that came of posting anything political.  I didn’t like some of the blatant untruths and obvious satire that were being passed around as gospel truth.  I didn’t like the hysterical, hyper-partisan mud-flinging, and a great deal of that was coming from ME.  And so, to anyone who asks:

I use it to promote my writing or my band, to make dumb jokes, to keep in touch with old friends.  I use it to pass on the message of recovery.  And, yeah, I use it to post pictures of my dinner.  Sometimes my dinner is really exciting!

If anything, I’m most guilty of using it to post pictures of my cats.  And that, I realize, is even more annoying than political posts.